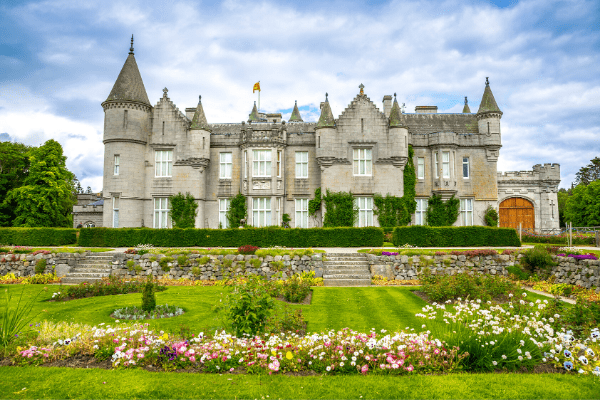 Ballater is the ideal base to explore Aberdeenshires’ 263 castles.

The north east of Scotland had strategic importance across centuries of turbulent history – invasions and war, rebellion and uprising, independence and occupation were all played out here. The evidence is in the remains of Iron Age hillforts, in ancient clifftop ruins, medieval fortresses, Scottish baronial castles, Jacobean mansions, and fortifications added in the 18th century.  In the centuries since, these often-extraordinary buildings have inspired famous storytellers such as Robert Louis Stevenson, Bram Stoker, Walt Disney and Franco Zeffirelli.

Of course, Aberdeenshire’s most famous castle is Balmoral which is located just a few miles from Ballater and open to visitors between April and July.  Balmoral is the summer residence of the Royal Family since the 19th century, described by Queen Victoria as “my dear paradise in the Highlands”.   Also close by is Braemar Castle, built in 1628 by the 2nd Earl of Mar, Crathes Castle with its beautiful gardens, and the stunning pink Craigievar Castle which is said to be the inspiration for Walt Disney’s Cinderellas Castle.  A little further afield, and well worth a visit is the medieval ruin of Dunnottar Castle, perched high on the cliffs close to the seaside town of Stonehaven.