Balmoral Castle (/bælˈmɒrəl/) is a large estate house in Royal Deeside, Aberdeenshire, Scotland, owned by Queen Elizabeth II. It is near the village of Crathie, 9 miles (14 kilometres) west of Ballater and 50 miles (80 kilometres) west of Aberdeen.[2]

Balmoral has been one of the residences of the British royal family since 1852, when the estate and its original castle were bought from the Farquharson family by Prince Albert, the husband of Queen Victoria. Soon afterwards the house was found to be too small and the current Balmoral Castle was commissioned. The architect was William Smith of Aberdeen, and his designs were amended by Prince Albert. Balmoral remains private property of the Queen and is not part of the Crown Estate.

The castle is an example of Scottish baronial architecture, and is classified by Historic Environment Scotland as a category A listed building.[1] The new castle was completed in 1856 and the old castle demolished shortly thereafter.

The Balmoral Estate has been added to by successive members of the royal family, and now covers an area of approximately 50,000 acres (20,000 hectares). It is a working estate, including grouse moors, forestry and farmland, as well as managed herds of deer, Highland cattle, and ponies. 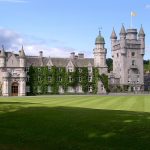