An important garrison after the 1745 Jacobite rising, Braemar Castle had been attacked and burned by John Farquharson, the Black Colonel of Inverey during the Jacobite rising of 1689, to prevent it from being used as a garrison by Government troops. In 1716 the castle was forfeited to the Crown following the Earl of Mar’s leadership of the 1715 Jacobite rising.[4] The castle and lands were purchased by John Farquharson, 9th Laird of Invercauld but the building was left in ruins until 1748 when it was leased to the government at a fee of £14 per year, now to serve as a garrison for Hanoverian troops. Rebuilding started under the command of John Adam, Master Mason to the Board of Ordnance.[2]

In 1831 the military garrison was withdrawn and the castle returned to the Farquharson clan. Restoration to provide a family home began under the 12th Laird of Invercauld who entertained Queen Victoria there when she attended the Braemar Gatherings in the grounds of the castle. In 1800 Braemar Castle was documented to have its moat intact.[5]

It has also been featured in the video to Andy Stewart’s “A Scottish Soldier”.

Since 2006 the castle has been leased to the local community. It is run on behalf of the community by local charity, Braemar Community Ltd and staffed by local volunteers, and an ambitious restoration program has been started. It reopened to the public in 2008. 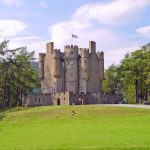