Ballater railway station is a former station in the village of Ballater in Aberdeenshire, Scotland. The station was formerly the terminus of a branch line from Aberdeen. It was the nearest station to Balmoral Castle.

The old station, containing Queen Victoria’s waiting room, was a visitor centre with a replica royal carriage. Unfortunately in the early hours of 12 May 2015, fire crews were called out to a major blaze at the station.  This was a huge loss for Ballater and the surrounding Deeside area, for which it served as a place for discovery, tourism and cuisine.

In response, HRH The Duke of Rothesay’s charity, The Prince’s Foundation, initiated an extensive restoration plan to reinstate the station to its former glory. During the rebuild, great care was taken to remain authentic to original details. For example, following a public consultation, the British Rail’s rich green palette, which the station’s exterior had adopted during operation but was later painted over, has been brought back. Meanwhile the interior of this listed landmark has been developed into a stunning dining experience, plus a visitor centre and local library.

The rebuilt station building houses a VisitScotland information centre, a restaurant and tearoom run by The Prince’s Foundation and a public library, as well as the Royal waiting room and carriage. 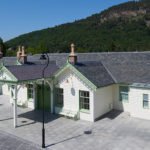